Sail Away: Celebrating the arrival of Dream Cruises’ ‘Explorer Dream’

Long known as a pacesetter in the global cruise industry, Dream Cruises recently welcomed the arrival of its magnificent Explorer Dream, as a part of a special journey: the 21-night trip entitled “Odyssey from Asia to Australia”, which departed from Shanghai on October 6.

Holding the title of the swiftest cruise ship in Asia, Dream Cruises’ pathfinder ship—built with German craftsmanship—is on the move to transform the company into Asia’s Global Cruise Line, which will be accomplished by sailing and homeporting beyond Asia for the first time. Sized at 268 metres long and 32 metres wide, the ship weighs approximately 75,338 tons, with 928 lavish cabins and a lower berth capacity of 1,856, with a majority of its suites sized at more than 40 square metres. The signature “ship within a ship” enclave of Dream Cruises, The Palace, offers a remarkable “True Asian Luxury” experience for smart travellers throughout Asia and beyond. The Palace boasts a high staff-to-guest ratio with a Proprietary Butler Training endorsed by its affiliated company, Crystal Cruises, dubbed as The World’s Most Awarded Luxury Cruise Line. 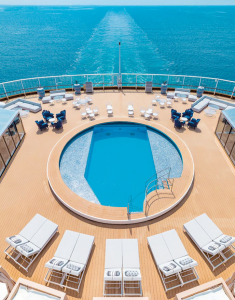 The opulent ship will be homeporting in Sydney, Australia, and Auckland, New Zealand, until December 15. As the excitement kicked in on this special relocation cruise, the Explorer Dream celebrated its inaugural arrival at two popular destinations in Indonesia, the lively port of Tanjung Priok and the picturesque Benoa harbour, with the latter having been awarded “The Best Port Welcome” from Dream World Cruise Destination magazine.

As well as the deployment in Australia and New Zealand, the Explorer Dream will also provide Indonesian cruise enthusiasts with an array of choices and tours with flycruise opportunities. With this visit by the Explorer Dream to Indonesia, Dream Cruises hopes to boost the local economy and its cruise tourism industry.

Making its first appearance in the premium and luxury Asian market in April 2019, Explorer Dream has since been ranked 17th in the top-20 Mid-Sized Ship category for the prestigious Berlitz Cruising & Cruise Ships 2020 guide. With its long-standing brand history, Dream Cruises was also proudly selected as the “Best Luxury Cruise Line” at the 30th Annual TTG Travel Awards 2019.